Merkur 34c vs 23c is bound to be an interesting comparison between the most popular Merkur safety razors.

The Merkur 23 and 34c are very closely related but the key difference is length. Otherwise these are both exceptional razors and you won’t be disappointed whichever you choose.

Another difference is that the 23c – often called the Merkur 180 – is three-piece while the Merkur 34c is two-piece as the base plate is attached to the handle.

If you like the slim and nicely-textured handle of the 23c but the length of the 34c then the Merkur 33c could be a good compromise and is three-piece.

Alternatively the Merkur 15C features a shorter version of the 23C handle and the open comb baseplate of the 25c. 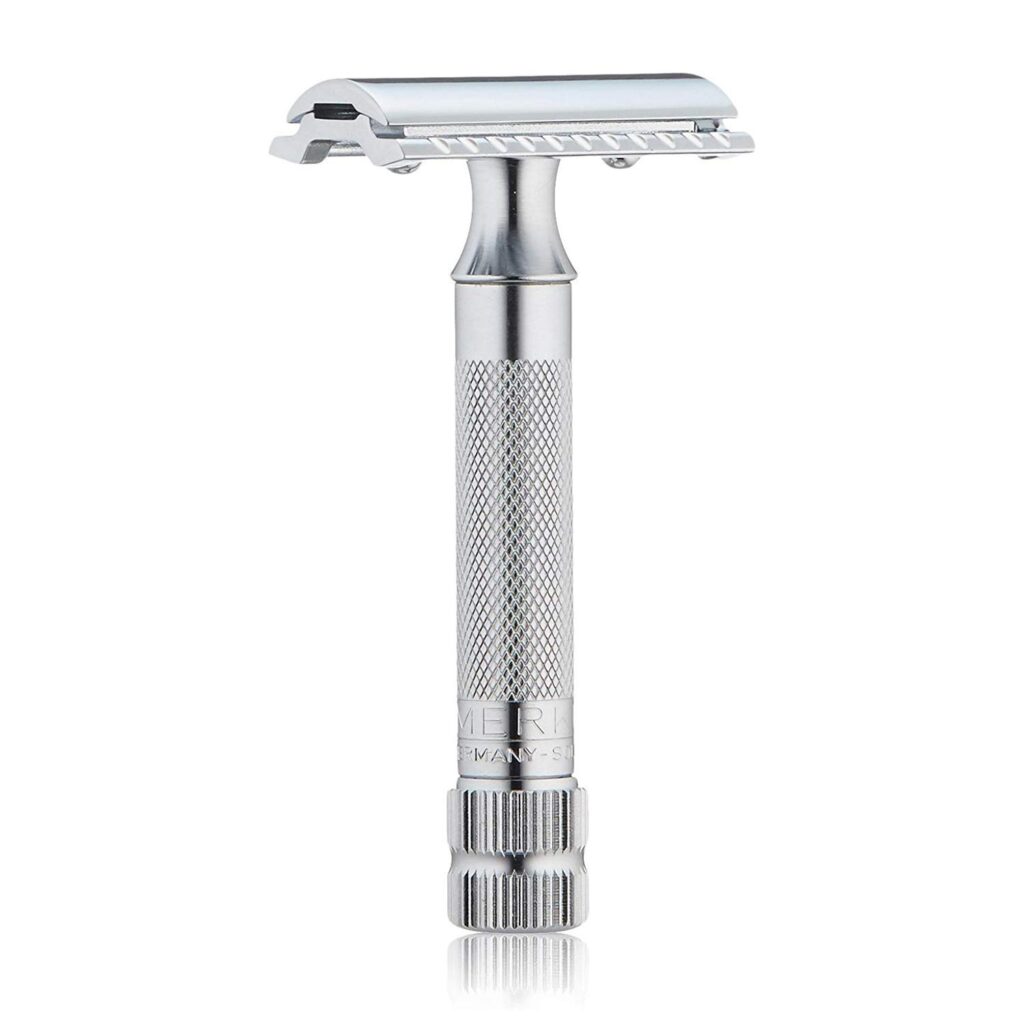 In terms of price despite the 23c seeming more specialist and more refined than the rather utilitarian 34c, the 23c is about $10 cheaper than the 34c.

Either way both are very reasonably priced mid-range razors and don’t come close to more premium options like the Merkur Futur or Feather AS-D2.

In reviewing the Merkur 34c vs 23c the defining difference is always going to be length. The Merkur 23C is 4″ overall while the 34c is 3.28″. While that might not seem much there is a difference of almost 25%, although the difference seems greater because the 23c has a thinner handle.

With a short handle like that of the Merkur 34c you are guaranteed two things: manouverability and feedback.

That means you can do a pass of the face quickly and easily, including difficult rounded areas like the chin and Adam’s apple. You feel the cutting edge against the bristles through your fingertips, meaning an efficient, nick-free shave.

On the other hand, short razor handles may not offer you much in the way of grip. You may have to daintilly hold the razor in your fingertips like a teacup, which is perfectly acceptable but not everyone’s cup of tea.

If you are more comfortable with a firmer grasp then a Merkur 23c long handled safety razor might be for you.

What are the advantages and disadvantages of a long handled safety razor?

An obvious perk is reach. If you are shaving somewhere other than your face – like shaving your head or shaving your legs – just an extra inch of handle can make a big difference. Besides the physical reach, the extra handle also provides more grip.

In particular this is one of the best safety razors for women because not only do you have to reach far down to shave your legs but you then need to find the right cutting angle, which involves levering the razor so it is roughly 30 – 45 degree to the skin. A longer handle can definitely help with this.

Another perk of the Merkur 23c is the handle is actually much slimmer which makes it easier to hold, especially with lots of knurling texture along its full length. The 34c only has a small amount of its handle covered with knurling.

The Merkur 33c offers a great compromise of Merkur 23c vs 34c with a length of 3.33″ and a weight of 1.98 oz with the same closed comb head as the 23C. The handle design is very similar to the 23c with a knurled texture throughout its length.

If you prefer a shorter handle but want a more aggressive shave then try the Merkur 15c. It features a shorter version of the Merkur 23c’s handle and the open comb of the 25c.

The Merkur 180 features a slim long handle with a total weight for the razor of just 2.3 oz.

That’s less than the much smaller Merkur 34c at 2.72 oz – although they do call it the Merkur 34c Heavy Duty for a reason.

The merkur 23c is only available in chrome. However, the Merkur 34c has a polished gold version called the Merkur 34g.

While the 23c and 34c have lots in common, the differences between them are quite key. If you’re still stuck, just ask yourself if you would rather short, nimble and robust or slim and long.

We’ve struggled with where to place them in our list of the best safety razors as they could equally be better for you depending on your preferences.